Grab your pith helmet, Grade "A" Fancy is on safari in deepest Queens in search of liquid exotica. Our prize: Zhumir Aguardiente from Ecuador. 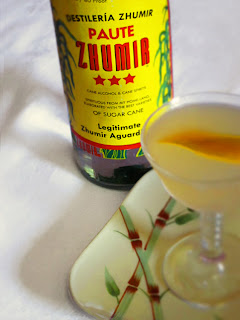 Living in Queens, a stroll through your local liquor provisioner becomes an international shopping spree. This week we had a thirst for something summery, but out of the ordinary. A spirit from a warm country seemed like a good place to start, and the hunt was on. Central Queens is home to many South and Central Americans, so we had a wander through Five Star Wine & Liquor on Woodside Avenue. Rum, cachaça, pisco — all delicious, but not quite the exotic prize we wanted for this safari. An unusual painted bottle and bold label drew our eye to a shelf full of Zhumir Aguardiente.  If they stocked so much of it, people must be buying it, but rotgut sells as well as the good stuff so that was no guarantee of quality.  The always enthusiastic, helpful gents at Five Star told us they sell a lot of Zhumir to their Ecuadorean customers. They also dispelled our fears that Zhumir was total alky red-eye. At $14, it wasn’t a serious investment so we bought a bottle and took it straight home (after a quick look in at Donovan’s to make sure that Guinness was still served there).

A little research revealed that aguardiente is a generic term, literally "firewater," that describes a variety of potent potables. Our Zhumir Aguardiente is made in Ecuador and is not the same product as an aguardiente from, say, Colombia, which tastes of anise. Zhumir is distilled after the fermentation of sugarcane.  Besides drinking straight shots, Ecuadoreans enjoy aguardiente in canelazo, a hot drink made with piloncillo brown sugar and water boiled with cinnamon.  Some recipes include the juice of limes, lemons or oranges. The green rhubarby-limey juice of the naranjilla is another popular mixer in Ecuador. Zhumir’s website tells us their aguardiente is "for the beach, the jungle, and the mountains."  That description seemed a little one-size-fits-all, but is actually right on target; it mixes well with fruit and can replace rum in any tropical drink, it has a somewhat overripe, jungly aroma, and bestows a soothing warmth, much like brandy, or pisco. It reminded us of Batavia Arrack (which derives from molasses and fermented rice) though Zhumir, at 80 proof, lacks its 100 proof heat. The texture is smooth and velvety, the scent and aftertaste suggests a pleasing funk, redolent of very ripe banana or cantaloupe. All this serves to mingle beautifully with spices and fruit juices, making this aguardiente a useful ingredient for the tropical drink enthusiast — and an affordable one, for once.

We have to confess we aren't big fans of the Great American Tiki Drink. We love the gimmickry (what grump could hate a hollow skull full of booze bestrewn with flowers and a plastic monkey) but they just don't satisfy like a proper Martini. So how to play nice with our aguardiente, but avoid the sugary fruit? We happened to be halfway through a classic volume of beverage lore, The American Drink Book (1953), this week and were reminded of a Roaring Twenties concoction, one with the truly awful — and oddly 1970s-sounding — name of Between the Sheets. The recipe calls for white rum, brandy, Cointreau, and lemon juice. Usually we’d pass on drinks with dopey names and multiple liquors; most turn out to be muddy novelties.  But this Between the Sheets was a big hit in its day, touted to be well-balanced and beguiling.  It read like a souped-up sour, or a Caribbean Sidecar.  You can see where this is going, right? We experimented with substituting the aguardiente for the rum.  And do you know what?  The fruity funk of the aguardiente was terrifically appealing. In fact, it’s sublime, better than the rum version.  It’s  a tiki drink gone sophisticated.  We also added a twist of orange peel, in a nod to the canelazo.

El Chimborazo
Because no grownup ever needs to utter the words "Between the Sheets" to her bartender, we’ve named our new take after Ecuador’s highest peak. The summit of Chimborazo is the farthest point on the Earth's surface from its center. Your own elevation will depend on how many of these you're brave enough to put down.

*Note:  Do not substitute Columbian varieties, like Cristal, which have an anise flavor.