A Quick One, In Ragtime

The cemetery is a fine spot for the curious to wander, and you will often be rewarded with a genuine curiosity. Odds are you didn’t know that a superstar of the turn of the last century, the “King of Ragtime,” who made his name in St. Louis, wound up in an unmarked pauper’s grave in western Queens. 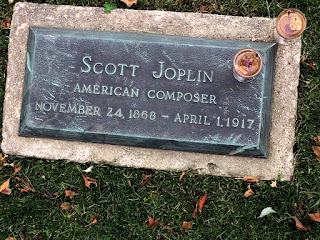 Beginning with the smash hit success of “Maple Leaf Rag,” in 1899, Scott Joplin went on to be a popular and prolific composer of ragtime, the syncopated synthesis of African American dance music and European classical and marches. His music was an important foundation for jazz, and by extension, every other pop form of the Twentieth century, but he’s mainly known nowadays due to a brief ragtime revival sparked by the movie soundtrack album for 1973’s The Sting, that featured several Joplin tunes (including “The Entertainer,” which peaked at number 3 in the Top 40 singles chart). His reign was short lived. The ragtime fad didn’t last long and Joplin’s fame wouldn’t either. Institutionalized for dementia caused by syphilis, he died in 1917 at the age of 49 in the Manhattan State Hospital on Ward’s Island and was buried anonymously in St. Michael’s Cemetery, East Elmhurst, Queens. Each year St. Michael’s puts on a free concert to honor Joplin, and we have attended many times. The cemetery is a little tricky to get to on public transportation, so it is usually a small affair, a few dozen locals and fans, a band, free hamburgers and hot dogs. This year marks the centennial of Joplin’s death, and the turnout was much bigger than usual, probably because of better publicity. The Paragon Ragtime Orchestra was the perfect choice for this one hundredth anniversary of Joplin’s death. The Paragons were eleven pieces strong and the program was mostly Joplin rags with a few other timely selections to provide some context. 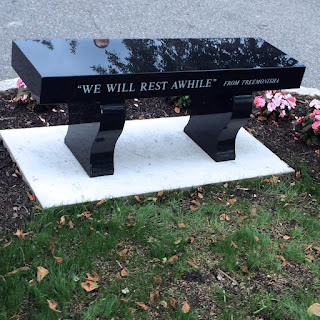 Joplin’s grave bore no marker until 1974 when ASCAP donated a simple bronze plaque. This year a memorial bench was dedicated as a somewhat grander tribute. Your Grade “A” Fanciers, of course, had other ideas about paying homage to the great musician. We were joined in a toast to Scott Joplin by our friends Gabrielle and Scott. 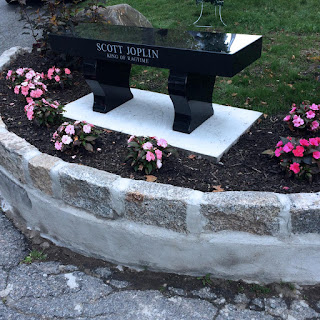 We devised an honorary drink for the occasion and named it The Maple Leaf Rag. Shooting for something that might have been downed at the turn of the century, this was composed with an Old Fashioned in mind, and it wasn’t too far a fetch that we'd add some maple syrup to salute Joplin’s first big hit. The Amaro Sfumato adds a little smoke for a barroom of the period, and a garnish of toasted walnut lends a trace of woodsy-ness and some tannins to counteract the sweet maple. Gab reminded us that walnut wood is used on pianos, which suited us swell.

Advance prep:
• Toast as many walnut meats as drinks you will be serving
• Dissolve maple syrup 1:1 with hot water and let cool

Shake lightly with ice and strain into a coupe glass. Garnish with a cocktail cherry and a toasted walnut. (Alternatively, this could be built as an Old Fashioned, in the namesake glass over ice.) After the concert we took a moment to visit another ought-to-be-famous resident of St. Michael’s. Just down the lane from Joplin is the modest grave of another African American legend, the man they called “the Black Edison,” Granville T. Woods. 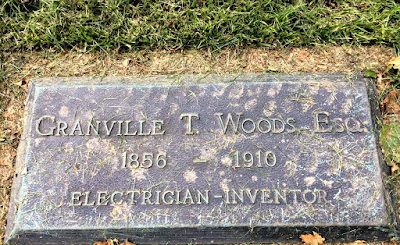 Born a freeman in 1859 in Columbus, Ohio, Woods was an electrician and inventor with 60-odd patents to his name. One invention, a multiplex telegraph, spurred a lawsuit from Thomas Edison challenging its patent. When Edison lost he offered to make Woods his partner, but was turned down. His work was also crucial to the development of electric trolleys and third rail transit systems. His remarkable life is way too crammed with accomplishment to recount here. We should pause a moment to remember him and consider how paltry this simple marker is as a testament to his legacy.

No comments:
Email ThisBlogThis!Share to TwitterShare to FacebookShare to Pinterest
Labels: A Quick One A Little Late, cemetery, cocktail, history, Queens, ragtime

The Borough of Showbiz

In this installment of a Quick One we go a-visiting with the inspiration for a popular cartoon personality and ponder the link between Broadway and Queens.

Queens has been called “the borough of jazz” for the many musicians who settled along the IRT Flushing line, now the No. 7, which provides a direct connection to Times Square and Broadway. It might be more accurate to say the borough of showbiz, because actors, musicians, and vaudevillians of all varieties, not just jazzbos, made that commute to their theater jobs. Beginning in the late ‘Twenties new neighborhoods sprang up in the “cornfields of Queens” thanks to the recent elevated line: Jackson Heights, Woodside, Corona all attracted their share of show folk who mixed in with other straighter refugees of the crowded clamor of Manhattan. It was a step up from the apartment hotels of the city.

One celestial couple of the Great White Way who made their home in Jackson Heights was hoofer Dan Healy and Helen Kane, the bubbly singer who was the model, both vocally and physically, for Betty Boop. We thought we’d like to lift a glass to them.

Helen (née Schroeder) came up in singing contests and chorus lines and went on to a full career as a Broadway star. Singing "That's My Weakness Now" in a show at the Paramount Theatre, the song's "boop-boop-a-doop" catchphrase quickly catapulted her to household name fame. She wasn’t the only one to interpolate baby talk in popular song, it was a gimmick many pop and blues singers used. An early example was in 1921's all-black Broadway smash Shuffle Along when Gertrude Saunders stopped that show cold with her number “Daddy Won’t You Please Come Home,” which ends with an entire scat chorus in baby talk. Helen wasn't the first, but she became one of the most successful, recording for Victor and headlining the Palace Theatre in 1928. Her fun-loving flapper persona became so popular that there were Helen Kane impersonation contests for aspiring Broadway babies looking to bust into show business. One winner of a contest held in Atlantic City was Mae Questel, soon to become the voice of Betty Boop.

Helen was a Bronx gal, fully evident in her movie roles like Pointed Heels (with William Powell and Fay Wray), Sweetie (with Nancy Carroll and Jack Oakie) and as the title character in Dangerous Nan McGrew. “Broadway’s Boy” Dan Healy was an established performer, showman and wheeler-dealer. You can see him in action as the oily Miller in the alternately fascinating and dull as a doorknob Glorifying the American Girl, (shot in Astoria, with heart-stopping location work at Grand Central Station and along 42nd Street). He was a master of ceremonies in night spots including the Cotton Club. Helen and Dan were portrayed in the 1950 movie Three Little Words. Debbie Reynolds played Helen, but it was Helen’s voice singing on the soundtrack.

Helen and Dan had skyscraper highs and serious lows; both finished their days together here at The Berkeley, a characteristically splendid Jackson Heights apartment building. 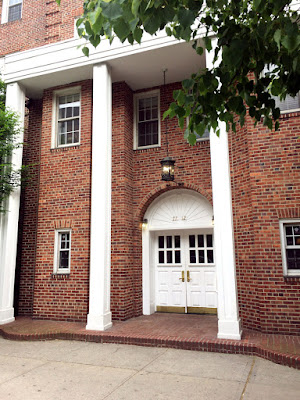 The Berkeley (fka Berkeley Hall), a neo-Georgian building with nine foot ceilings in its 84 units at 77-12 35th Avenue, was erected in 1937. It had a roof garden, children’s playground and gymnasium. It is now a co-op.

Our cocktail hour with Mr. and Mrs. Healy features the Charleston, from The Savoy Cocktail Book.  It’s an aromatic and potent sipper made with equal parts gin, maraschino, kirsch, Curaçao, Italian and French vermouths, and garnished with a lemon peel. A half ounce of each will build you a 3 ounce drink, and upon giving it serious thought, we have two suggestions: first, choose a bracing gin, and to top it all off, add a cocktail cherry after you’ve expressed your lemon peel. 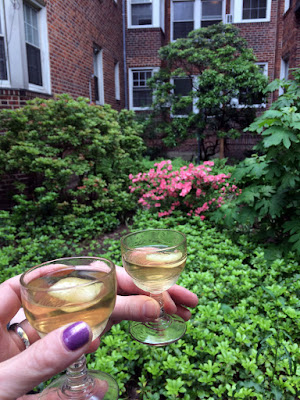