A Quick One at Bleeck's

New York City is a jumble of eras. As another glass tower rises, our 1882-vintage underground steam system pokes its head up to laugh. A building comes down and a ghost sign touting hair tonic or whalebone corsets is exposed on the adjoining bricks. At a brand new cocktail lounge we might admire a tile floor dating from three shops ago, or wonder about the path the backbar has taken over the course of a century to arrive here, though it is frustratingly mute to our attempts at an interview. The restaurant we ate at last night could very well be eulogized in Jeremiah’s column this afternoon. Today’s newspaper is already old by the time it hits the newsstand.

When we’re reading —even if it’s fiction— and a notable address is mentioned, we can’t help running down the street to see what’s there now. It’s exciting when some scrap from the past remains, but fat chance these days; odds are everything’s long gone. Sometimes not even street numbers persist if a block has been busted up by an office tower, often sporting a showy new realtor-minted address. In a recent binge-read we gobbled up Jack Finney’s time travel fantasy novels, “Time and Again” and “The Woodrow Wilson Dime.” Even if you never daydream that, by some clever mind game or simply squinting real hard, you could maybe (maybe, maybe) trick a parallel world into view, Finney style, the many strata of city history are there in plain sight, waiting for you. Our city is a boîte boneyard, a nite-spot necropolis, a potter’s field of cabarets, oyster palaces and hotel lounges.

Some names of past hotspots still live on in popular lore — your Stork Club, your El Morocco. But there were others, maybe smaller in size and fame, that were at one time just as legendary with a certain clientele. Today they are nearly unknown. The heyday of these storied joints, long departed, can never be recreated. But if we can’t step inside, let’s loiter outside and toast, in salute to good times past. We may be a little late, but we have time for a quick one.

In the offices of the New York Herald Tribune these words always signified a field trip to Bleeck’s, the bar at 213 West 40th Street, just “a stein’s throw” away from the newspaper’s back door. The Herald Tribune was at 230 West 41st Street from 1924-66, but the employees’ entrance was one block south at 219-220 West 40th; today, fittingly, this is the entrance to the CUNY Graduate School of Journalism. Bleeck’s was destroyed by fire in 1981 and 213 is now a link in the Hale & Hearty Soup chain.

In 1925 Jack Bleeck (pronounced ‘blake’ in the Dutch manner) finagled a charter for a social club he named The Artist & Writers Club. No one was ever quite sure the reason for that singular artist. The private club angle was a dodge to skirt Prohibition. Soon there were 6,000 members on the rolls, a sizable proportion of these were ink-stained wretches from the Trib. At this point everyone just called it Bleeck’s. Ace Broadway press agent and Bleeck’s regular Richard Maney told Life Magazine readers in 1945,


Even those skilled in distinguishing shadings in the spectrum find it difficult to determine where the Herald Tribune leaves off and Bleeck’s starts in, and vice versa.

It is said that when the walls of the saloon would begin to shake as the presses upstairs started their run, the bar would clear out as newsmen ran to check their copy. The New Yorker offices were also nearby, and soon Joe Mitchell and A.J. Leibling were leading James Thurber and their co-workers along a well beaten path to Bleeck’s door. Eventually reporters, columnists, writers and press agents from all over town made the bar a favorite literary hangout. Dick Schapp interviewed Norman Mailer there to coincide with the publication of “An American Dream.” The Newspaper Guild union was practically formed there in 1933 when Heywood Broun encouraged Bleeck’s habitués to join.

Bleeck’s was a busy joint. In the early days it attracted opera singers from the old Met, just a block away, and sundry thespians and stagehands from the National Theatre (later the Billy Rose, now the Nederlander) at 208 West 41st Street. Tallulah Bankhead is remembered wearing mink with slacks while she shot dice with French sailors during her 1939 run at the National in Lillian Hellman’s “Little Foxes.” Bogart brought Bacall to learn the famous “match game.”

As described in Life, the match game was born in Bleeck’s and the fierce competition became the stuff of legend. A game for any number of players, each hides in his fist from zero to three matches. Contestants guess the total number of matches held, and a correct guess means you are eliminated. This continues until there are two players left. From this point, the best two out of three rounds wins, and the loser pays out a predetermined stake to each of the winners.

The local color at Bleeck’s was not restricted to its famous patrons. The staff had its characters, too, according to Lucius Beebe, in “Snoot If You Must,”

It was at Bleeck’s that Harry McCormack, the demented barkeep, imagined he maintained a complete poultry farm and apiary behind the bar. The premises, in his fancy, were filled with white leghorns and bees in clover, and he was forever scattering imaginary cracked corn to his flock among the duckboards back of the ice bins. He was an excellent barkeep.


Shall we have a look at the place today? 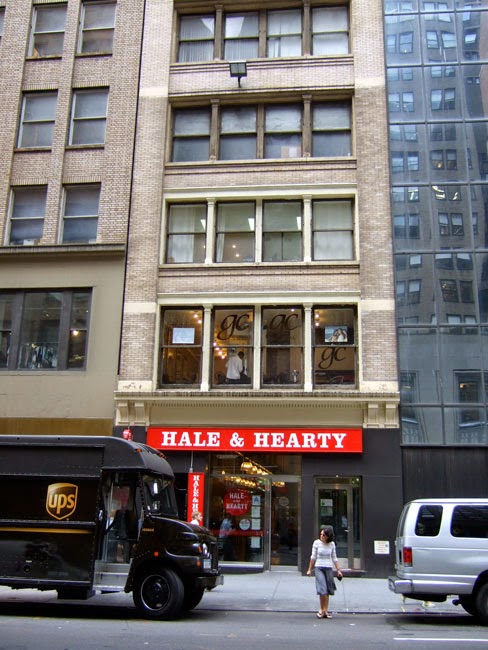 The Artist [sic] and Writers Club (later Restaurant), or more familiarly, Bleeck’s. Today you can get turkey gumbo to go instead of knockwurst, beer and camaraderie. 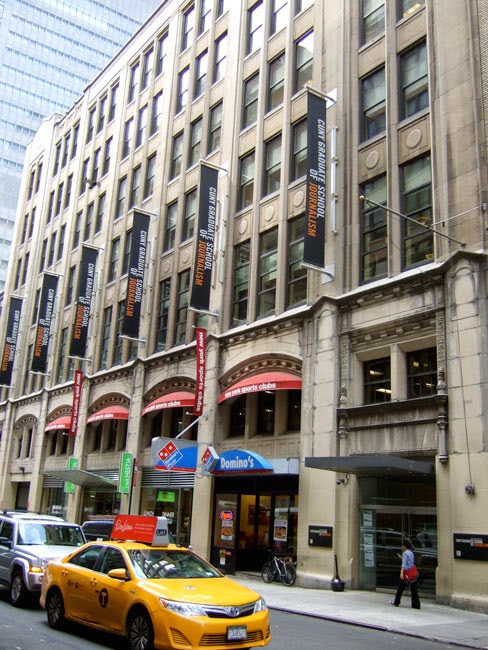 Two doors west, once the backside of the New York Herald Tribune and currently the CUNY Graduate School of Journalism. 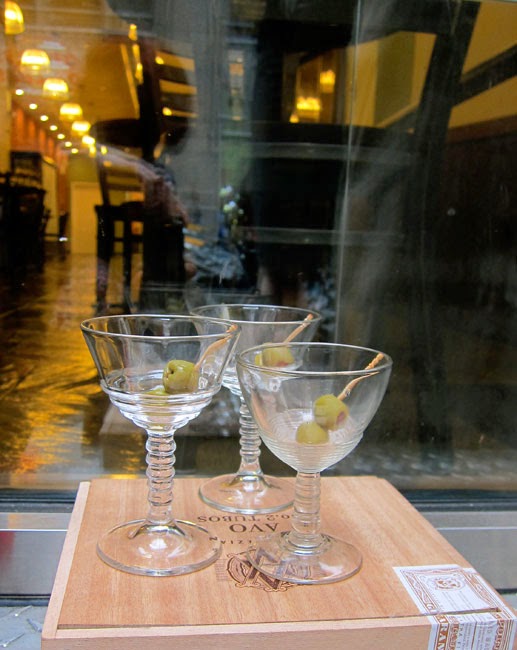 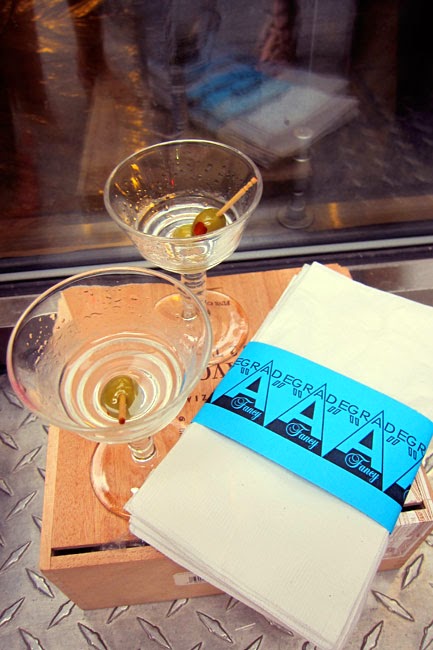 Cocktails on West 40th Street with the ghosts of Bleeck’s, while commuting hordes advance towards Port Authority and Times Square. Bleeck’s Martinis were preconcocted at 5-to-1 and kept on ice behind the bar, chilled and ready to be served undiluted. Ours are similarly readymade and thermos-cooled for sidewalk quaffability. 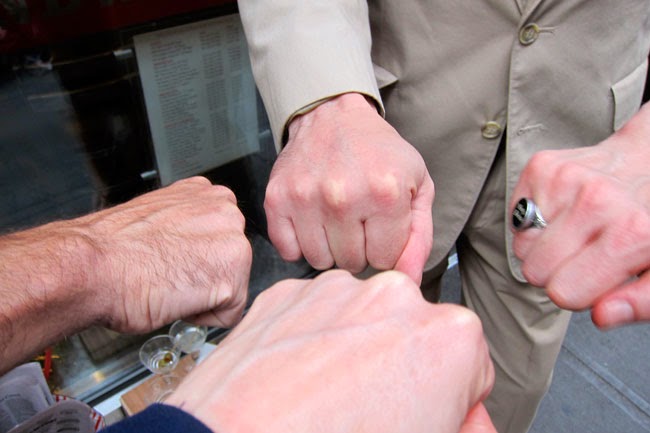 The match game begins. We keep an eye out for John Law as dollar bets are placed. 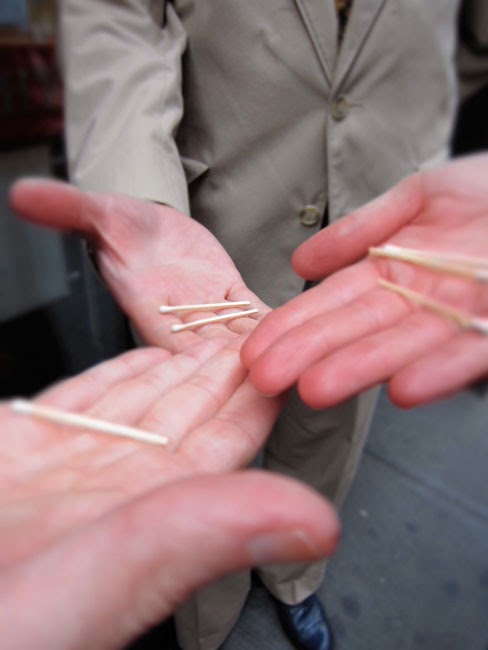 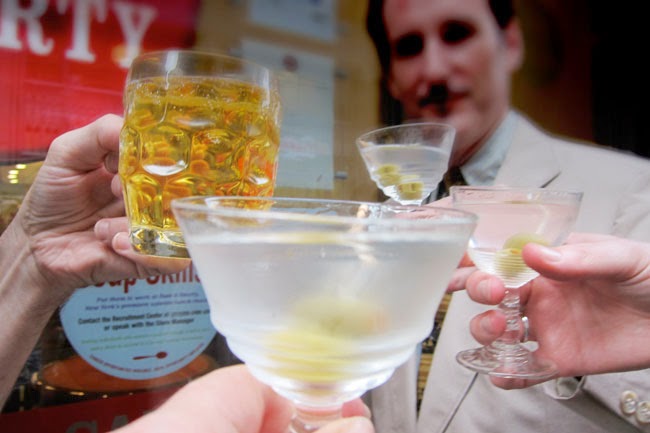 “Wanamaker Pfeufferneuse Knickerbocker Benchley!” (Our own Grade “A” Fancy version of “Down the hatch!”) And a toast to the memory of Jack Bleeck, and to the grand tradition of New York City trade bars.

In the next installment of A Quick One, A Little Late, we’ll drop by a chophouse that was a second home to all the Broadway Babies in the Roaring Twenties.
No comments:
Email ThisBlogThis!Share to TwitterShare to FacebookShare to Pinterest
Labels: A Quick One A Little Late, history, Times Square
Newer Posts Older Posts Home
Subscribe to: Posts (Atom)