The Tempo King, The Marine Room and Chicken Tetrazzini in the Subway

Research is a shaggy dog. And more often than not that dog will disappear down a rabbit hole. When casting about for tasty bits of New York City barroom history for A Quick One, A Little Late, the winding path taken can be as fascinating as the ending. Take this example wherein a little sleuthing into the origins of a stride piano record leads to an opera megastar, a little bit of radio broadcasting history, and finally deposits us in a downtown subway station, loitering in front of some nautical froufrou that once adorned a spectacularly whimsical grotto in Herald Square.

The other day, a song came on the radio, a novelty number from 1936 with a stride piano strongly reminiscent of Fats Waller. The vocal was clearly not Fats, but it was pleasantly laid back and the trumpet break interesting. We looked it up and learned that the band was called Tempo King and his Kings of Tempo. Catchy!  Some snooping on the Google machine yielded more than four dozen sides cut under the Tempo name with this line-up: the Marsala brothers, Joe on clarinet and Marty trumpet; the great Eddie Condon, guitar; Queenie Ada Rubin on piano; Mort Stuhlmaker playing bass; ace drummer Stan King; and the vocal by Tempo King. Some of these names were familiar enough to surmise that this was a white group trying to cash in as a Fats Waller sound-alike act, but who, we wondered, were the two halves of this fake Fats: the piano of Queenie Ada Rubin and the voice of “Tempo King?”

Nobody seemed to be sure, although conspiracy theories were, unsurprisingly, easy to find. A fanciful moniker like Queenie Ada Rubin doesn’t immediately come across as real, and speaking of aliases, clearly nobody was born Tempo King, so he’s got to be a fake too, right? Some people suggested that Fats Waller cut these tunes himself; it was the golden age of musicians recording under a pseudonym to dodge exclusive contracts, and everyone did it. Probably just a series of record dates Waller’s good friend Condon put together to earn him a payday without The Victor Talking Machine Co. getting wise. But a little searching in newspaper archives laid that theory to rest. Radio listings from 1935 tell us that Tempo King and his Kings of Tempo played Saturday nights on WMCA, and the Times notes that Tempo King opened a trio engagement at the Town Casino Club in July 1936, so the act was more than a studio concoction. Plus Ada Rubin would have been an old hand at radio dates by this time since we found regular solo appearances listed for her from the 1920s. And how’s this for sewing things up: in a biography of music publisher Joe Davis, author Bruce Bastin reveals that Rubin worked as Davis’ secretary at about the same time he was publishing Waller’s tunes and she was playing with the Kings of Tempo. She continued to perform on 52nd Street long after the band was kaput, according to Linda Dahl's Stormy Weather, a guide to women in jazz. So while there is little chance that Queenie Ada Rubin was a figment of anyone’s imagination, we haven’t discovered the true identity of Tempo King. Some of the mysteries may remain unsolved, but the fact that the group played regularly on WMCA is a concrete connection to a spot of New York history.

In the earliest days of radio it was common for stations to be owned by a city’s tallest hotels because they were awfully convenient places to stick a broadcast tower. The first broadcast from a New York hotel was hosted in 1920 by the McAlpin on Broadway and West 34th Streets. Opera superstar Luisa Tetrazzini (yes, her legacy includes the namesake chicken dish) took to the nascent airwaves with a recital beamed from her apartment at the hotel. The show was arranged by the Army Signal Corps and its success convinced the McAlpin’s management to dive into the radio game in a big way. In 1925, WMCA (McA — get it?) began a regular schedule of broadcasting from its glass-enclosed circular studios, fashionably Art Deco stylish and technically cutting edge, newly built on the 24th floor. The hotel soon sold the station to Broadway playbill publisher Donald Flamm, and by the end of 1928 the studios moved into the Hammerstein Theatre building on 53rd Street where in 1935 Tempo King would make those Saturday broadcasts. 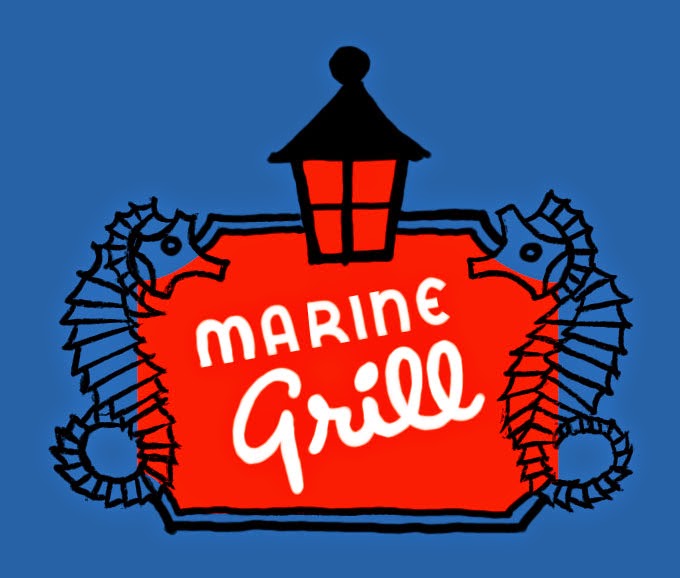 The McAlpin was also home to an eye-popping example of turn of the century glamour more apropos to the proceedings on these pages, the glorious Marine Grill. Dating from 1913, a year after the opening of the palatial McAlpin, this restaurant in the hotel’s basement was an immense maritime fantasy seating 250 diners. Polychrome terra-cotta covered every inch of the stocky piers and vaults, framing 24 lunette-shaped murals of New York’s seafaring past designed by Fred Dana Marsh. In 1957, the room became The Gate of Cleve, a hoked-up burlesque of a grand old restaurant in Amsterdam. By that time the writing was on the tiles. Over the years, as the McAlpin’s fortunes slid, the space accommodated a string of mediocre hash houses — one German, another Indian, a Japanese — and miraculously the interior largely survived these humiliations. But in 1976 the hotel was converted to rental apartments and by the Eighties the management ran out of takers to lease the restaurant. Plumbing repairs necessitated the destruction of its ceiling in 1989, and the following spring the space was stripped. Ground floor retailer The Gap began using it for a storage room. The majority of the interior went into the trash (a preservationists’ horrifying nightmare) but a salvage company retained sixteen of the terra-cotta murals, offering them for sale.

That would be too sad an ending, and you know we always like to see the glass half full of gin, so fear not, there is a happyish finale. Six of those murals, rescued by the NYC Landmarks and Preservation Commission, can be seen today by anyone with the price of a subway fare. The MTA, through its Arts for Transit program, installed these six lunettes and the restaurant’s iron grillwork gate in the William Street entrance of the Fulton Street 2-3-A-C subway station. 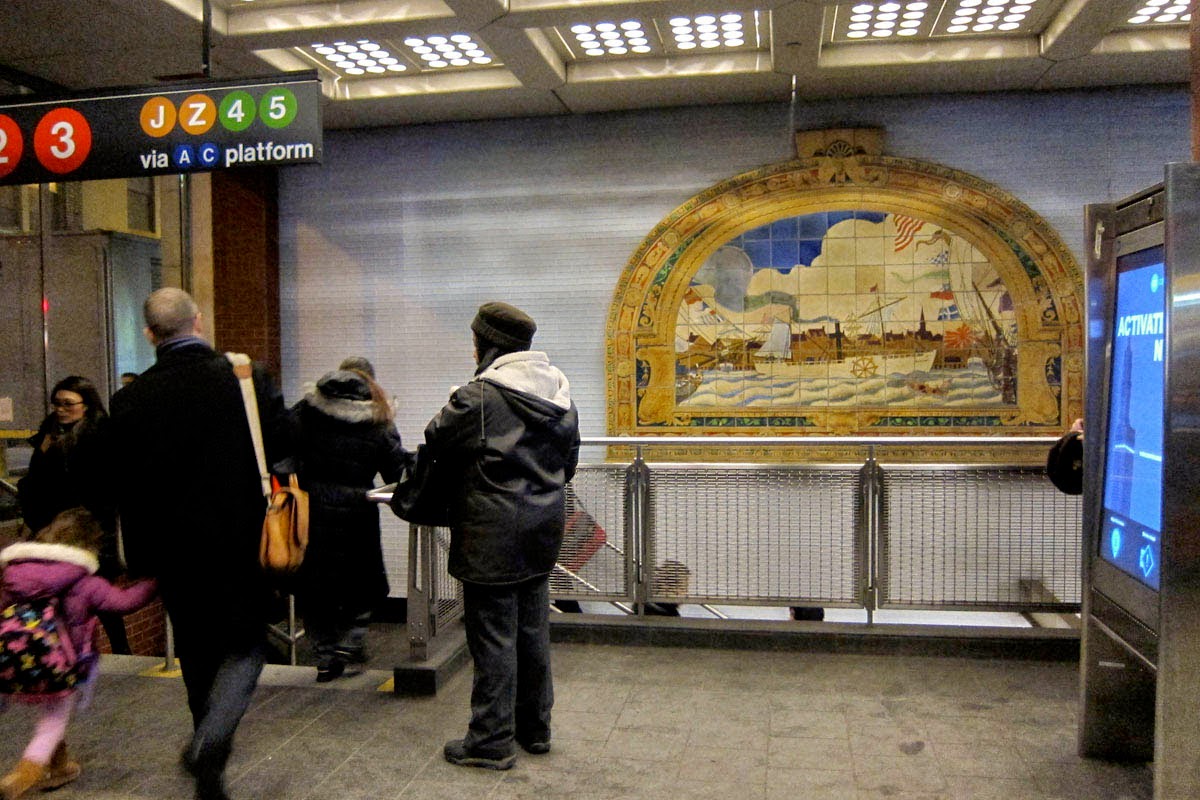 The mural at the top of the stairs honors Robert Fulton’s Clermont, the first commercially successful steamboat, which plied a passenger service between New York and Albany beginning in 1807. 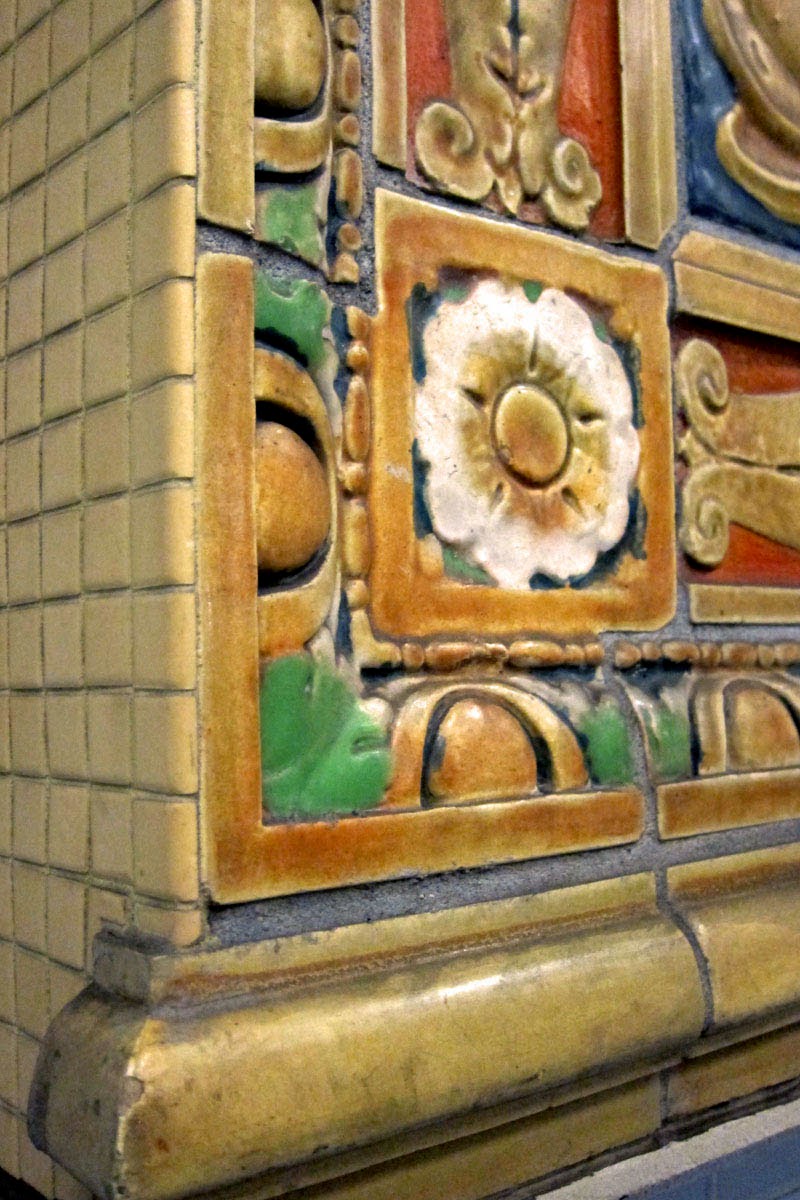 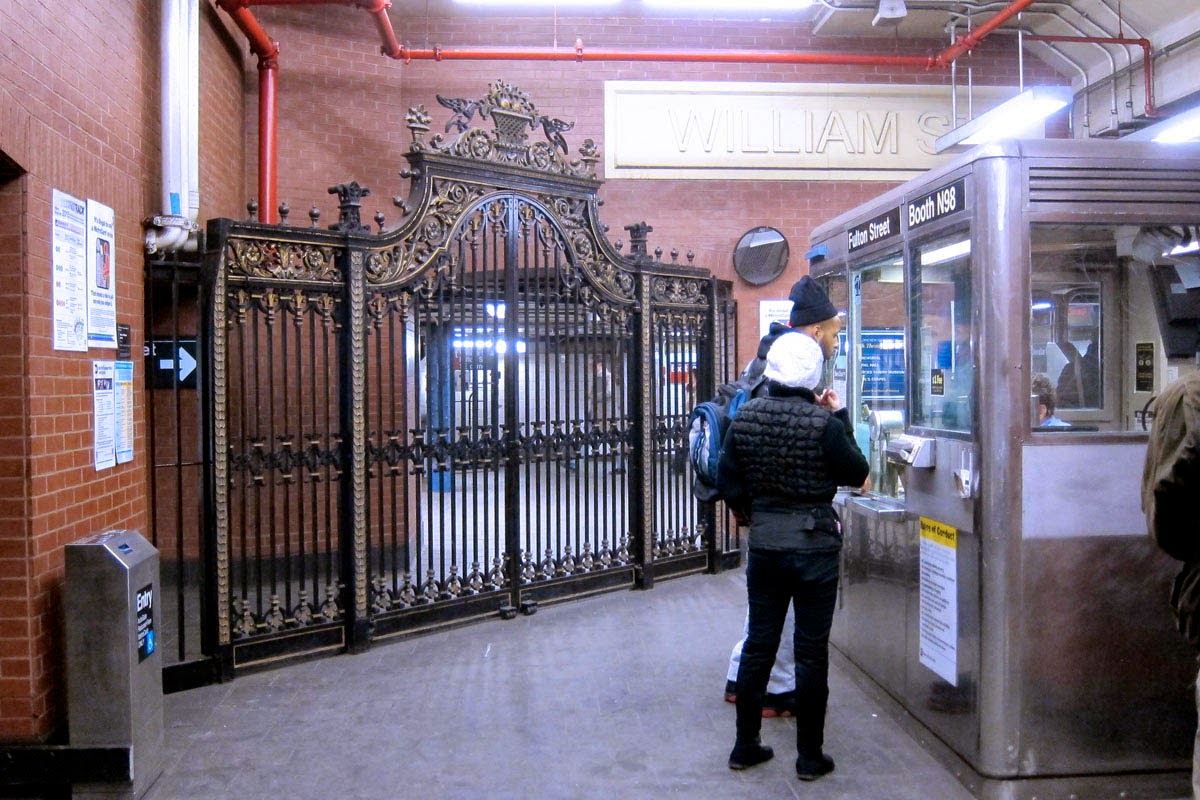 Downstairs, facing the token booth, is the cast iron gate that once decorated the entrance to the Marine Room.


Through the turnstile and to the left are the remaining five murals. The original native New Yorkers, the Lenape, canoeing out to greet the arrival of Henry Hudson’s Half Moon is the scene in the center. Flanking Hudson to the left is the Commonwealth, the last and the largest of the Fall River Line steamers, and a British warship in New York Harbor during the Revolution, possibly on a foray up the Hudson River in July 1776. On the right, we find a tug guiding the luxury liner RMS Mauretania, and a depiction of settlers entering the harbor of New Amsterdam during Dutch colonial times. After seeing everything was shipshape with the survivors, we buzzed up to Herald Square for a look at the carcass of the McAlpin, and of course, a Quick One. 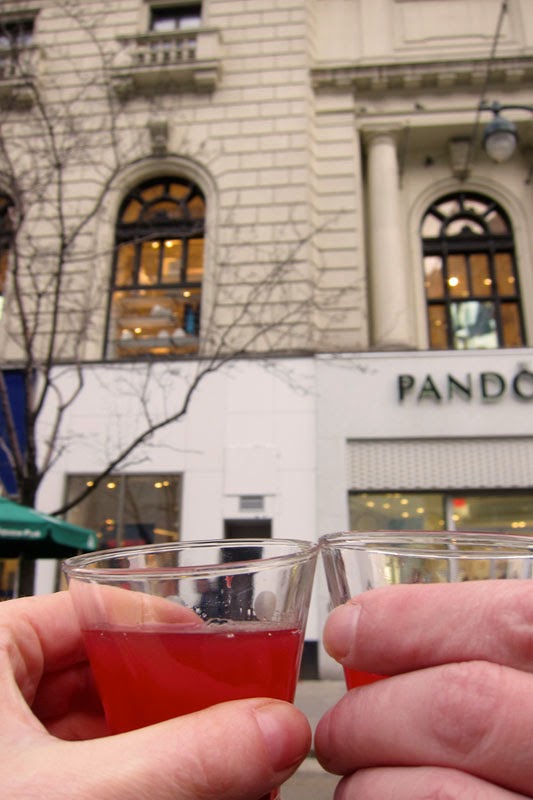 For a toast to maritime history, the Grade “A” Fancy cocktail department prescribed a rum and lime drink.  Here at a cocktail table in the ass-park on Broadway, we knock back what we’ll call a McAlpin Daiquiri:  Muddle two pitted cherries (fresh or from your grocer's freezer, thawed) in a glass with a flat bottom that will permit muddling.  Shake two ounces rum (El Dorado 8 Demerara Guyana on this occasion), the juice of ½ a lime, and a teaspoon superfine sugar with ice until you’re tired.  Strain the liquid over the cherries and that’s it. 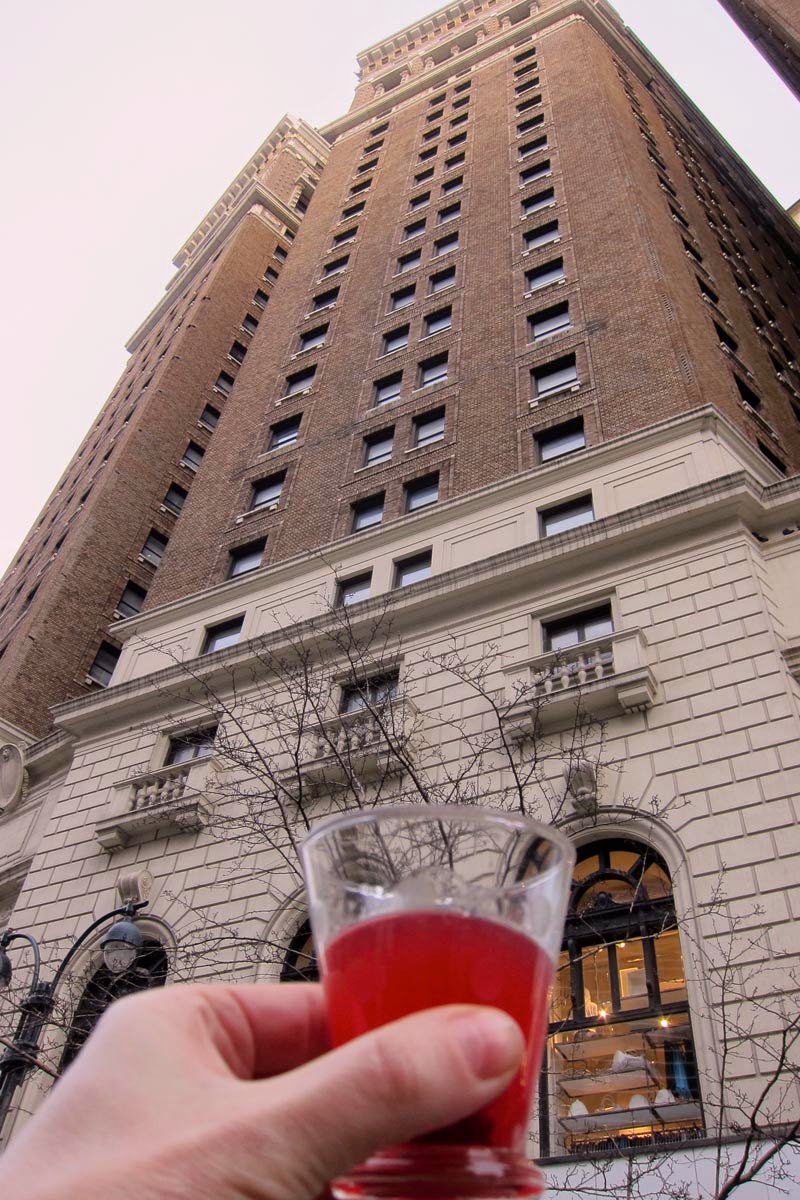 No comments:
Email ThisBlogThis!Share to TwitterShare to FacebookShare to Pinterest
Labels: A Quick One A Little Late
Newer Posts Older Posts Home
Subscribe to: Posts (Atom)