A quick one a little late at a midtown holdout that surprises.

You do run into old acquaintances in the strangest places.

There is a certain sainted saloon we’ve read about for years, a celebrated writers’ hangout of the last century, a place called Costello’s. Gone since 1992, so it was a shock to say the least when we encountered a bit of this storied joint’s remains in an aggressively average midtown sports bar.

But first, let’s raise a glass to holdouts, those little buildings that have resisted progress, and to their plucky owners who gave the middle finger to the fat cat high-rise developers. Such a painful amount of fine stock has disappeared from midtown, so we hold in esteem those tough nuts, the heroes who spare us from a homogenous glass and steel cityscape. There are a number of famous holdouts: there is Hurley’s bar*, the four story building on the corner of Sixth Avenue and 49th Street that refused to sell out to Rockefeller Center; there remains the weenie 19th century building at 34th and Broadway that Macy’s was forced to build around; the townhouse on 60th Street across from Le Veau d’Or, now dwarfed by skyscrapers; and of course P.J. Clarke’s saloon. None of these were architectural show-stoppers in their day, but today they shine as reminders of when cities were built at a more human scale. 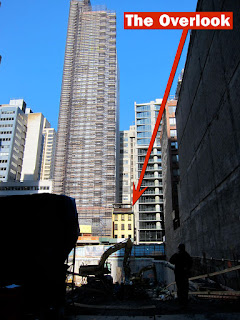 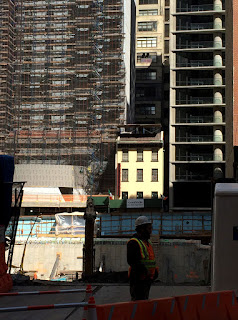 At the moment, cranes are everywhere you turn. The current monsoon of money (which somehow avoids our grasp) fuels rampant construction which means a heaping helping of rabid destruction of New York City. The blocks of 43rd and 44th Streets between Second and Third Avenues are, as we speak, being ripped apart by a full block-through pull down, and old office buildings, printing plants and garages are pfft. While the neighborhood suffers the unendurable noise and unimaginable loss of business, a wee 1926 townhouse at 225 East 44th Street stands up defiantly to the scaffolding and open pits that soon will sprout even more soulless towers. This holdout is the now aptly named Overlook bar. It is the kind of place we would have passed without a glance just a few years ago: the ubiquitous sports-woo! atmosphere, the corporate post-collegiate clientele, it’s an utterly bland and uninviting run-down joint illuminated by a couple dozen TVs. It has the look of a rock club in the daylight: no character to speak of, not even the gloss of one of those cookie cutter prefab Irish bars. But if there’s one thing we know about New York City, it’s that there is always something you never saw before. And indeed the Overlook has a startling and unique bonus. Venture past the branded beer sign décor and hypnotic sports screens to the back room and you’ll find the walls are covered with cartoons – so many familiar faces, and some obscure characters nearly lost to time. They commemorate not only the work of dozens of comic artists, but also the last remnant of Costello’s, the famed newspapermen’s saloon. This was the last outpost of the bar, established as a speakeasy, surviving into the 1990s, and immortalized by Tim and Joe Costello’s regular customers, many of whom were top-drawer writers.


Costello’s was a favorite stop for a hard-drinking literary set which included Ernest Hemingway, John O’Hara and the New Yorker bunch. Its earliest edition was upstairs at the corner of Lexington Avenue and 44th Street, but its most celebrated locations were at the corner, and near corner, of Third Avenue and 44th from the ’30s-‘70s, where it became known as a shining example of an old-fashioned Irish bar of the under-the-Third Avenue Elevated variety. John McNulty set countless Talk of the Town pieces there, and made the recurring character of Tim Costello famous in its pages. Another star at the magazine, James Thurber, made his mark on Costello’s in a different way. In 1934 he covered a wall with his cartoons to settle his bar bill. When in 1973 the building was to be razed, the bar moved again and landed finally at 225 East 44th. Thurber’s art survived the journey but was sometime thereafter “lost.” 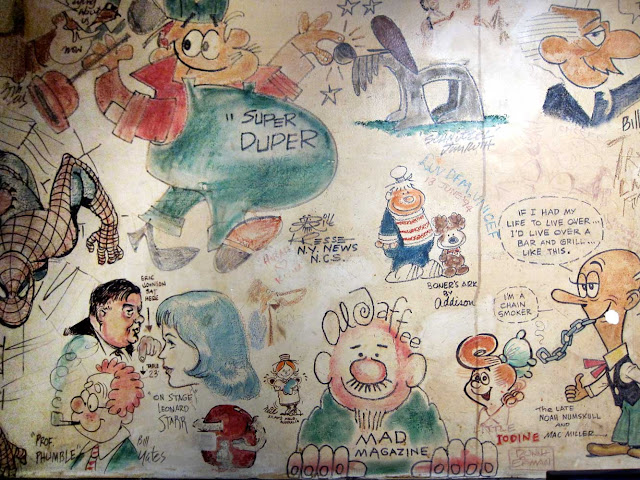 By this time the crowd at Costello’s included newspapermen from the Daily News, nearby wire services, and artists from the big cartoon syndicates. The walls seemed a little bare, and one May afternoon in 1976, after some nudging by Tim Costello, Jr., Daily News cartoonist Bill Gallo organized a party of fellow National Society of Cartoonists members to decorate the place.

Costello’s passed into saloon history for good in 1992.

225 East 44th served the thirsty as the Turtle Bay Café through the early 2000s when it lost its lease and there was talk – crazy talk that is – of gutting the premises, but that is when the Overlook stepped in. 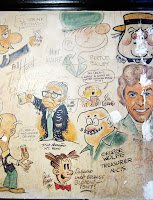 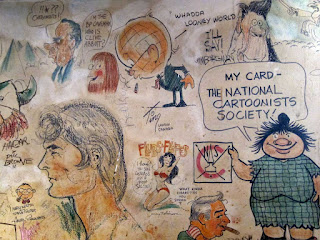 And today – in the same year that The Palm cruelly whitewashed comic art history – almost miraculously, the murals remain. They may be a little beat up, but the cream of cartoonery is there, dominated by Stan Lee’s Spiderman and Milton Canniff’s Steve Canyon, alongside Bullwinkle the Moose, courtesy Al Kilgore: Mad Magazine is represented by a gang of Sergio Aragones’ Mexican revolutionaries and a self-portrait by the great Al Jaffee; there is a fabulous array of funny pages superstars from the 1970s: Hagar the Horrible (Dik Browne), the Lockhornes (Bill Hoest), Boner’s Ark and Beetle Bailey (two smash hits from Mort Walker); for fans of the obscure, McGown Miller gives us a classic gag from his King Features one-panel character Noah Numskull and Bill Yates offers up professor Phumble; sharp-eyed New Yorker fans may spy a disgruntled dog from the pen of Charles Barsotti; the op-ed crew is here too, with Dick Hodgins giving us a pan-handling Mayor Abe Beame, and all this is just for starters. Appropriately for the time and place, there is a booze-happy theme to many of the yuks.

But wait, there’s more. In 2005 the owners of the Overlook took a stab at honoring their historical windfall by inviting Bill Gallo back to decorate the opposite walls. The new gang of cartoonists reprised several characters from the old mural, including Beetle Bailey, Dondi, and the Lockhornes. A highlight of the new wall is an Alfred E. Neuman by Mad art director Sam Viviano. 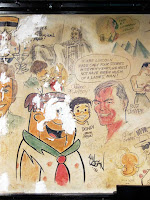 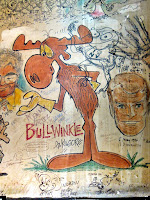 This is no shrine or museum. There is no velvet rope or protective Plexiglas bolted to the wall. In the freewheeling spirit of Costello’s the art is presented in the raw, subject to the wear and tear of seepage and careless patrons. Visit on a weekend afternoon when it is quieter and you can commune with the cartoons without bugging anybody. Settle in with a beer or a Bloody Mary, and a copy of McNulty’s “This Place on Third Avenue,” and tune out the comical present.
—————————————————————

*Hurley's saloon is no more; the building was ultimately sold and today houses a branch of a particularly loathsome cupcake chain.