Hot dog! We’re pleased as punch that a brand new book, Repast by Michael Lesy and Lisa Stoffer, has found its way to the Grade “A” Fancy mailroom. Shall we take a quick peek inside? 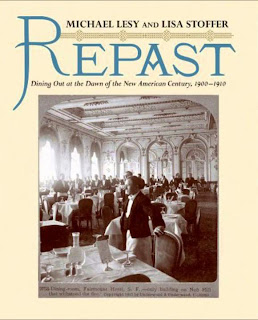 As indicated by the book's subtitle, Dining Out at the Dawn of the New American Century, 1900-1910, the focus is on the first decade of the Twentieth century, a time of immense social and political upheaval, examined via all aspects of the food biz; from canning and meat packing, and the beginnings of sanitary standards for those industries, to the many evolving options, high or low, exotic and workaday, for eating outside of the home.
The inspiration for Repast was the Buttolph Menu Collection in the Rare Books Division at the New York Public Library.  The collection, assembled from 1851-1930 by the delightfully named Miss Frank E. Buttolph, provides a good portion of the images in this handsome, well-designed volume.  Some menus are ornate, some utilitarian, all are a fascinating glimpse of a past that can be simultaneously familiar and alien.

Reading the menus can make us pine for the days of abundant shellfish (Little Neck clams thirteen ways at Dennet’s on Park Row, for instance), and pie, pie everywhere. The text exposes real world workers’ conditions and the strikes that followed, the “embalmed beef” scandal of the Spanish-American War and attention to purity of food after the reports and subsequent government intervention. You will discover the fashion for sanitary-appearing restaurants, such as the Child’s chain, with its gleaming tile, bright lighting and nurse-type waitresses’ uniforms,  the result of a proto-Bloombergian anxiety over cleanliness. There are chapters on new methods of serving lunch quickly to office workers, and how the emergence of women as customers and proprietresses brought new styles of eating places. All enormously curious, mouth-watering helpings of American history. Perhaps it’s true when they say that the way to a historian’s mind is through his stomach. 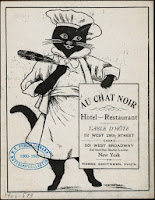 Repast~Dining Out at the Dawn of the New American Century, 1900-1910 was written by the team of Michael Lesy and Lisa Stoffer, university eggheads from Massachusetts, released 10-28-13 by W.W. Norton & Co. (not our Norton Records/Kicks friends, and not the Malbec wine producers in Argentina either, just so you know.) The menus shown here were cribbed from the NYPL's Buttolph archive online, and all can be found among the many delicious plates featured in the book.