A Quick One at Billy La Hiff's Tavern

Some names of past hotspots live on in popular lore — your Stork Club, your El Morocco. But there were so many others, maybe smaller in size and fame, that were at one time just as legendary with a certain clientele. Today they are nearly unknown. The heyday of these storied joints can never be recreated.  Well, if we can’t step inside, let’s loiter outside and toast, in salute to good times past. We may be a little late, but we have time for a quick one.


It was an occupational bar and neighborhood tavern, linking glitz and guts and newspaper ink.  They intersected in the neighborhood known as Times Square.

From the day it opened in 1922, Billy La Hiff’s Tavern at 156-158 West 48th Street was a hit. It drew a Runyon-esque crowd; show girls and comedians, professional gamblers and gangsters, columnists of both the gossip and sports pages, ball players, turf accountants, prize fighters and their managers, all made the Tavern their home base. The roaring success owed much to the personality and reputation of host Billy La Hiff, and his expert staff led by the wise-cracking Jack Spooner, with Walter George Gates and Pat Geraty. This trio of star waiters had spent the ‘Teens honing their skills at Jack Dunston’s saloon (across from the famed Hippodrome) where they had a unique method of giving trouble drunks the bum’s rush. Adapted from the gridiron, they called it “the Flying Wedge,” and they would later employ it at La Hiff’s.

At age 16 Billy La Hiff left Providence, RI for New York City, landing a job in the wine cellar of the old Waldorf-Astoria under the tutelage of famous maître d’ Oscar Tschirky. Within two years he had advanced to wine steward, a high status job that acquainted him with all the top movers and shakers in café society: Diamond Jim Brady, Harry K. Thaw, gambler Dick Canfield, and Ward McAllister, the arbiter of New York’s fabled “Four Hundred.” His Waldorf connections would prove useful when in 1905 La Hiff struck off on his own, opening the Gayety Café at West 46th Street and Broadway, with partner Frank Gerety. The next venture, the Strand Café, was a solo effort located a block uptown on Broadway. He later moved off the thoroughfare to West 47th and rechristened his restaurant the Strand Chop House. In 1919 he sold the lease on this property at considerable profit, setting the stage for his most famous eatery. 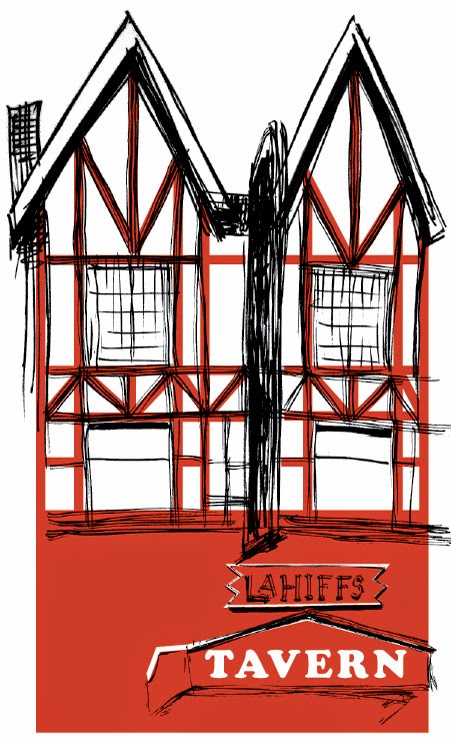 Adjacent three story townhouses were acquired, numbers 156 and 158 on West 48th Street next door to the Vanderbilt Theatre.  A renovation joined the two structures, added a story, and opened in 1922 as La Hiff’s Tavern, with rental apartments above.

Those rentals would house a cast of Broadway characters over the years. The apartments took on the aspect of a bachelor pad for a time when Walter Winchell and Damon Runyon, both ducking the women in their lives, and cartoonist Bugs Baer lived upstairs from the Tavern. Other notable residents included a pre-Stork Club Sherman Billingsley, and Jack Dempsey. In 1930 newlyweds Ed and Sylvia Sullivan moved in.

Downstairs the Tavern was awash in celebrity. Every major Broadway star of the ‘Twenties made their way to La Hiff’s: Harry Richman, Paul Whiteman, Al Jolson, comics Bert Lahr and Bert Wheeler were regulars. Stardom became a family affair when one of the younger regulars, Billy’s niece Ann LaHiff, doing business under the stage name Nancy Carroll, found fame on Broadway before Hollywood stole her away. When Barbara Stanwyck was still Ruby Stevens, teenaged chorus girl fresh out of Greenpoint, Brooklyn, she and her roommates Mae Clarke and Walda Mansfield knew Billy was an easy touch for a roast beef dinner when money got tight. Presumably he saw the value of decorating his restaurant with vivacious chlorines, regardless of their ability to pay. The Tavern was in the English chop house style so popular at that time; the beef was very good, but it was the ale that columnist Westbrook Pelger remembered as about the best you could find during Prohibition. Speaking of the noble experiment, apparently it didn’t matter that Mayor Jimmie Walker was a regular, when the Feds wanted a raid they got it. On July 31, 1932 agents bought a glass of ale and promptly herded the waiters and cashier into patrol wagons.  On the street, a crowd of a thousand, both La Hiff’s diners and Broadway passersby, jeered the cops, according to the New York Sun. La Hiff’s Tavern was reopened for business within the hour.

With a new Madison Square Garden just a couple blocks over on Eighth Avenue and 49th Street, the Tavern drew the top talent in the pugilistic world. The joint got even more interesting. One evening, after Harry “The Pittsburg Windmill” Greb successfully defended his middleweight title against Mickey Walker, both fighters found themselves relaxing at the Tavern. Words were exchanged, and before long the two pugs decided it was best to take a walk outside and, to the delight of sports writers and fans at the bar,  start slugging each other, a bizarre encore to the fifteen grueling rounds they had just completed at the Garden. On another memorable night, Greb was spotted drinking at La Hiff’s before a big bout. The Tavern being filled with professional gamblers, as it always was, his drunken appearance lowered the betting odds in a considerable hurry. But the wily Greb had only been drinking ginger ale that evening and won the bout handily, thus enjoying a bonanza on wagers made much more profitable due to his subterfuge. La Hiff’s was so much a part of the prizefighting world that Jimmy Breslin, in his biography of Runyon, painted a picture of Primo Carnera training in the top floor loft.

Big league baseball players favored the Tavern as well. The last game of the 1926 World Series begat another legend connected with La Hiff’s. Pitching ace Grover Cleveland Alexander had already won two games for the Cardinals. After his victory in game six, and assuming the team wouldn’t need him again, he celebrated so vigorously at La Hiff’s that the morning of the seventh game found him back at the Tavern trying to shake off a monumental hangover. Manager Rogers Hornsby, fearing he might need Alexander, sent a taxi to collect him from the Tavern and deliver him to Yankee Stadium. By the seventh inning the starting pitcher had developed a blister. After scant warmup, Alexander came in with the bases loaded and the dangerous Tony “Poosh ‘Em Up” Lazzeri at the plate. He struck him out, closed out the remaining innings with no damage from the Bombers, and St. Louis won the Championship.

It’s no wonder columnists were drawn to the Tavern as the hub of the Times Square scene. Newspapermen found the goings-on irresistible. Besides Sullivan, Winchell and Runyon, the usual crowd would include Grantland Rice, Gene Fowler, Westbrook Pelger, Mark Hellinger Leonard Lyon, Ring Lardner and Brooklyn Eagle gossip Rian James, who lost badly at checkers to Billy La Hiff but always came back for more.

After La Hiff died in 1934, his son, Billy Jr., hired Toots Shor as manager. Toots had made a reputation as a trusted bouncer and glad-handing doorman in a series of top speakeasies, Owney Madden’s the Five O’Clock Club being the first. In 1936 the younger La Hiff sold out to Shor and a partner, Philadelphia real estate developer Paul F. Herron. Shor and his wife moved into the apartments above the Tavern and enjoyed the established La Hiff Tavern scene, mixing with the sporting and entertainment worlds. This idyll lasted until the end of 1938 when Toots’ gambling losses pushed him out of the job. But the atmosphere at the Tavern suited Shor’s personality so perfectly that when he opened his own joint in 1940 it was to follow the same lively pattern.

Jack Spooner went on to maître d’ the Cub Room at Sherman Billingsley’s Stork Club. Walter George Gates kept on at the Tavern, logging something near six decades as a waiter. La Hiff’s Tavern closed in 1942.

The empty space was filled by another established restaurant, Zucca’s, relocated from 118 West 49th, its home since 1919. In 1965, Rockefeller Center bought the building for Manny’s Music whose original location would be razed to make room for new office towers as the complex expanded across Sixth Avenue. Manny’s reopened in 1969, sold out to Sam Ash music in 2009, and the store at 156-158 West 48th finally closed in 2012. 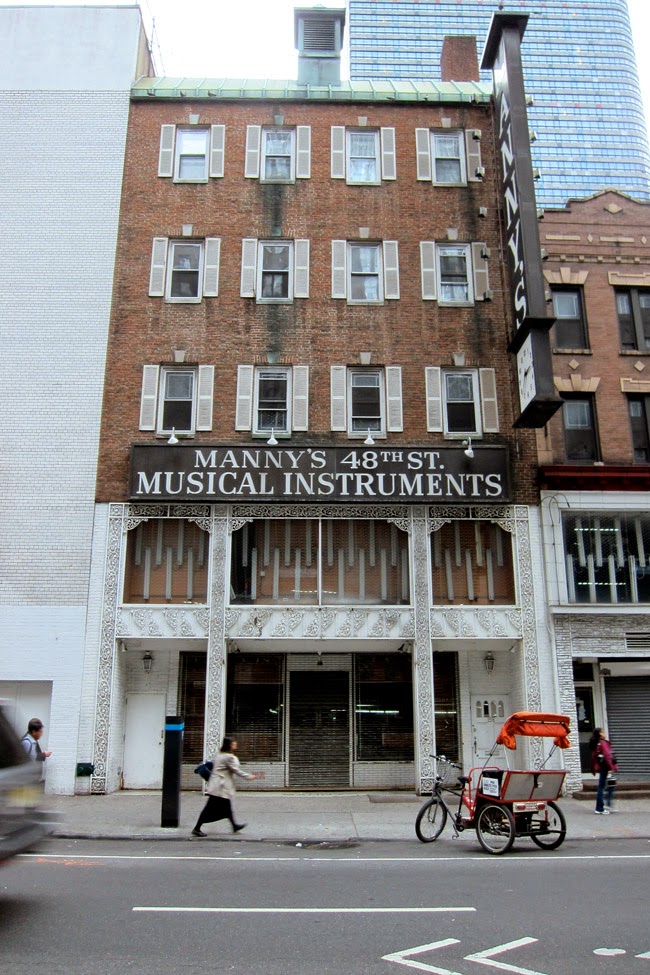 There’s nothing left of the glory of Billy La Hiff’s Tavern. 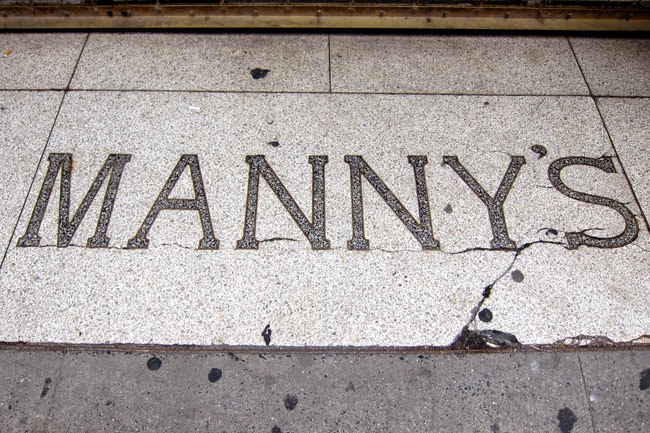 And Manny’s is just a name inlaid into the tile in front of a locked roll down gate. 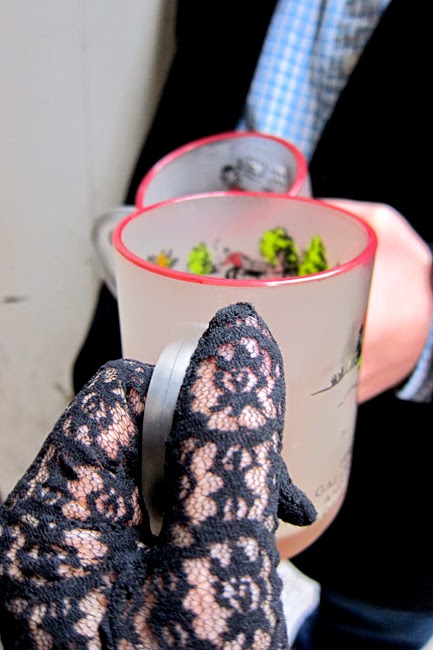 But here on the sidewalk we raised a glass of ale to Billy La Hiff and the memory of one of the brightest spots on the Great White Way.

Next time we have a Quick One, A Little Late we will be taking a peek at another long gone hot spot, one that kept our Bohemian ancestors well lubricated.
Email ThisBlogThis!Share to TwitterShare to FacebookShare to Pinterest
Labels: A Quick One A Little Late, Broadway, history, Times Square