A Quick One At The Krazy Kat Klub

For years Volare has been among our favorite Village restaurants. Food and service are top notch, and the building, at 147 West 4th Street, is overflowing with history. Gertrude Vanderbilt Whitney began her Studio Club, which would eventually evolve into the Whitney Museum of American Art, in the main and lower floors, John Reed worked on Ten Days That Shook the World here and Edward Hopper had his first solo exhibition at the Club. It housed a later version of the Bohemian hangout Polly Holliday’s restaurant until sometime in the early 1930s when the space became Mother Bertolotti’s. 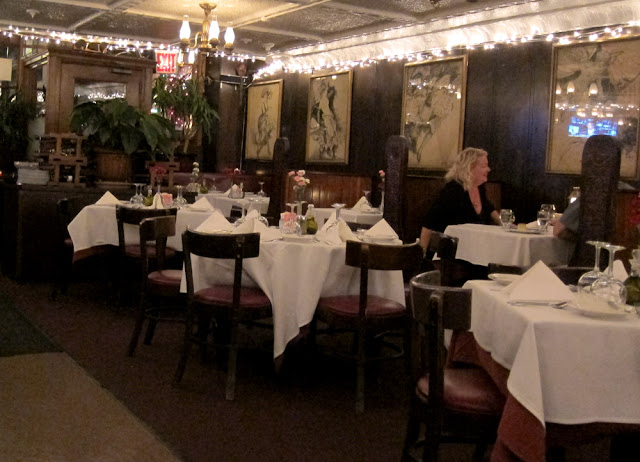 As enjoyable as the osso bucco and the vitello tonnato, as impeccable as the waiters’ jackets, as lovable as the archetypal Greenwich Village Italian restaurant interior, the incomparable thing about Volare is the art on the walls. Above the booths hang large charcoal and crayon drawings of scantily clad showgirls cavorting with elegantly attired sports. We asked our host about them and he said they were created by a successful Broadway set designer called Cleon Throckmorton.  That’s a name that’s hard to forget. Installed during the Bertolotti era (some are dated 1933), they remained with the restaurant when it became Volare in 1984. 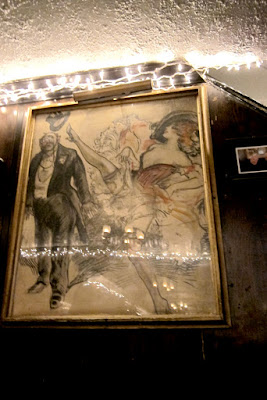 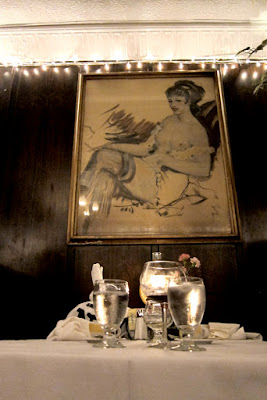 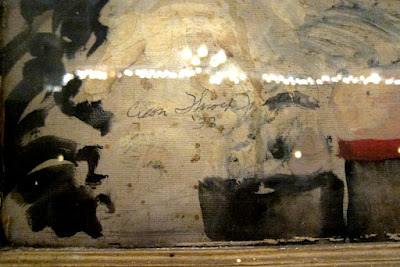 In 1924, fresh out of college in Washington, DC, Throckmorton went to work designing sets for the Provincetown Players, starting with Eugene O’Neill’s Emperor Jones, and dressed many of their productions for several years. Moving to Greenwich Village after that first season was the natural next step. An early commission was his design for the interior of the Cherry Lane Theatre, also in 1924. He soon went on to conquer Broadway.

From the moment he hit the Great White Way, he was apparently kept hopping. His October 25,1965 obituary in the New York Times tells us, “In the nineteen-twenties Mr. Throckmorton became so busy and so prominent that his name, it was said, appeared on Broadway playbills with a frequency exceeded chiefly by the fire commissioner.” 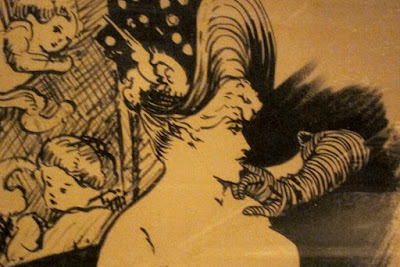 A fascinating side project and grand amusement was launched in 1928, when he and his buddy, writer Christopher Morley, began staging a series of old-time nineteenth century melodramas, played for satirical laughs, in a dilapidated theater in Hoboken. From the Gay Nineties look of the stage-door Johnnies and chorus girls in his Volare drawings, Throck thoroughly enjoyed the campy charm of Old Broadway. It’s clear these characters knew how to have a ball. Enjoying the wilds of the “last seacoast of Bohemia” meant art projects galore, not only sets and posters but the creation of their own Hoboken Free State with related gewgaws including a flag, city map, and elaborate passports issued to friends and acquaintances. (Fans of Yo La Tengo and other 1980s Hoboken scenesters will relate to these ancient artists on the other side of the Hudson.) There’s a great book about these fun-filled days called Born in a Beer Garden; Or, She Troupes to Conquer: Sundry Ejaculations by Christopher Morley, Cleon Throckmorton and Ogden Nash; And Certain of the Hoboken Ads with a Commentary on Them by Earnest Elmo Caulkins; Embellishments by Edward A. Wilson, George Illian, Cleon Throckmorton, August William Hutaf and Jay.


That’s a little about Mr. Throckmorton. Unsurprisingly, we became fans the moment we clapped eyes on those walls at Volare. From that day we were on the lookout for Throckabilia, so you can imagine our eyes were like saucers when our daily dose of the Shorpy photo blog began to deliver posts featuring the man himself! These photographs date to 1921, Throckmorton’s college days in DC, and show Cleon and friends, decked in Bohemian splendor, at play in and around a speakeasy/nightclub of their own creation called the Krazy Kat Klub (or sometimes Klubb.) Descriptions of the interior mention a riot of gaudy Impressionist and Futurist pictures on the walls, and a clientele of students, artists and atheists. It was one of the very few speakeasies we’ve ever heard of to boast a treehouse out back.


The club was of course named in honor of George Herriman’s masterpiece, the comic strip Krazy Kat. Although the strip lasted from 1913 to 1944, the twenties would have been the height of its popularity, and it is impossible to overstate the impact of Herriman’s creation at that time with highbrow types. Not many daily comics inspired essays from art critics, and even a ballet (1922). The innovative art and surreal story lines had to have had an irresistible appeal for the youthful Throck and his arty pals.

All this vicarious hotcha was well and good, but the spirit of Grade “A” Fancy demanded that one day we would have to track down what remained of this den of frivolity. Recently, finding we had business in the District, we did just that. 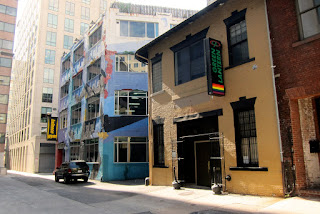 The Krazy Kat Klub was housed in a stable down an alley called Green Court, off Thomas Circle. The building is long gone, probably Charleston’d to flinders. The blue building, now a gym, is where it once stood. 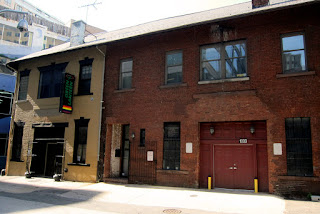 But you can get an idea of what it may have looked like from the converted stables across the alley, which currently hosts a gay bar of long standing. 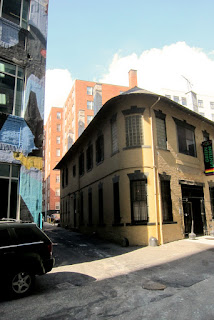 On our return home there was no question but to visit Volare to raise a glass to Cleon Throckmorton, surrounded by his fabulous drawings.

A toast! To Throck and his showgirls, to George Herriman and Krazy Kat, and to all the iconoclasts and flappers, the members of the Klub. 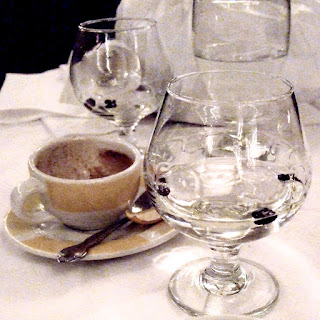 Email ThisBlogThis!Share to TwitterShare to FacebookShare to Pinterest
Labels: A Quick One A Little Late, Greenwich Village, history, Volare